These are obscure interactive toys featuring some interactive features a Furby has. They were sold by a company called Cool Things Corp., a company known
for selling generic and knockoff toys. Though it bears no resemblance to Furby, the description for the toy is
very similar to the type of description you would see for an original Furby toy or a Furby fake being advertised.

The toy was priced at $12.50 per piece and was created in 1999. They came in four colors with each color having its own name. They resemble dragons with little stubby
arms and fluffy (or spiky??) tail tips, and they speak their own language called Grinbese. The only photos of them archived are in poor resolution and
kind of look like CGI, though they might be photos of the actual toy. The pink one looks like a recolor of the blue or purple Grinbee, though. I don't
know if they are made from rubber or plastic. 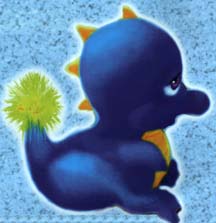 On a side note, I don't know if the toy was ever sold by another company under another name,
though I don't think it was. An employee from Cool Things Corp., Ayala Lourdes, filed the toy's trademark on 8/9/1999.

The toy is said to have come in a colored box with a window, according to the official website.

It's interesting to see just what unpredictable Grinbee will say next! Grinbee can speak "Grinbese" & can be "taught" to speak English. He can speak up to 200 words &
phrases. His eyes blink & his mouth & hands move when he speaks. Feed him when he's "hungry". Turn off the lights & Grinbee will go to sleep. When Grinbee
says, "It's party time", he's ready to play a game. When he gets "sick", he needs attention. When 2 Grinbees meet, they can interactively chat with each other. Grinbee
comes in 4 vivid colors: BLUE, GREEN, PINK, & VIOLET. [sic]