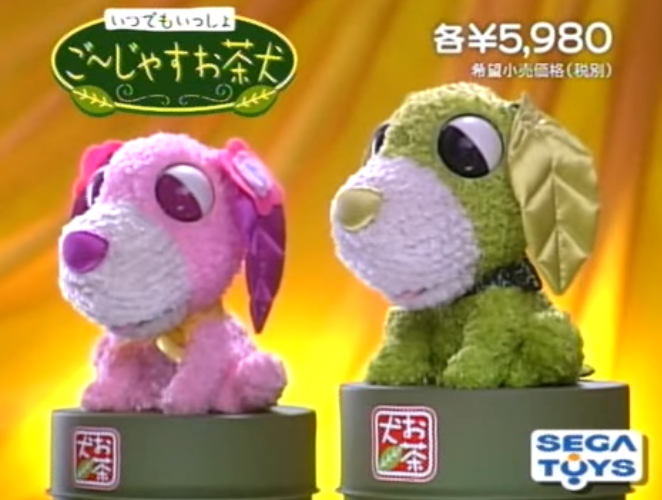 Always Together Gorgeous Ocha-ken (いつでもいっしょご～じゃすお茶犬) is an interactive pet from Sega Toys that is based on
two characters from the franchise 'Ocha-Ken'. Ocha-ken (お茶犬) can mean 'Tea Dogs' or 'Tea Puppies'. 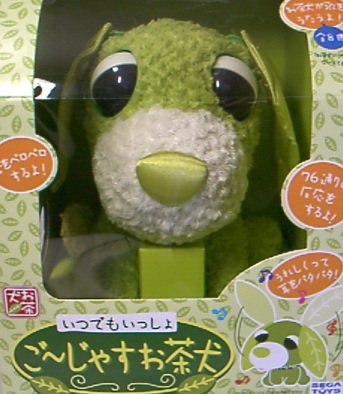 The toy has long ears resembling leaves that move up and down, a pair of white eyelids that blink, and a pink
tongue that pokes out. They have a tail that resembles a leaf, though it does not move. It has a light sensor located
beneath its nose and a light sensor in its head. The toy is in a sitting position, unlike another similar Ocha-Ken toy.
It uses 3 AA batteries and can come as either Ryoku (the green version) or as Hana (the pink version). 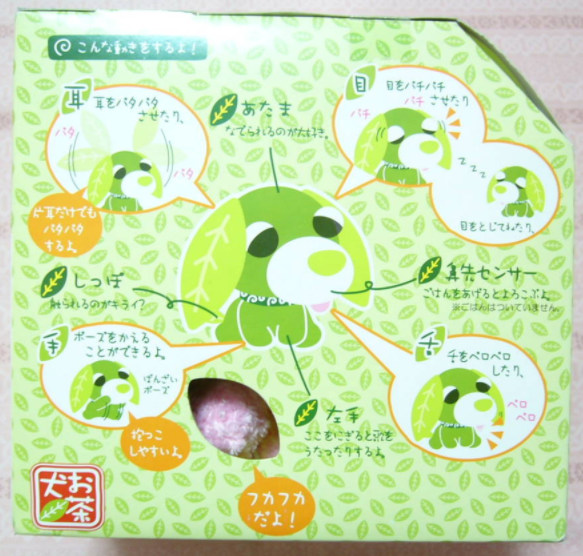 If you put something near the tea dog's nose, covering the light sensor, the dog
will pretend to eat it. The light sensor in its head helps the dog know when you are petting it. It dislikes having its tail pinched,
and pinching it a number of times in a row can stun the dog. Pressing one of its paws can make the tea dog regain its consciousness.
The tea dog can sing up to 8 songs, and will automatically go to sleep if you leave it alone. You can wake it up by pressing its paw.
According to the manual and box, you can pose your tea dog's front paws. The toy is said to have 76 different reactions.

The two tea dogs below could be prototypes. Both are from stock photos, and the Hana version of the toy
shown below appears to have a black pair of eyes unlike, the released version which has purple eyes.
Ryoku's version appears to have darker green fur, but I don't know if that is simply due to the lighting of the photo. 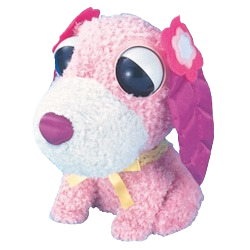 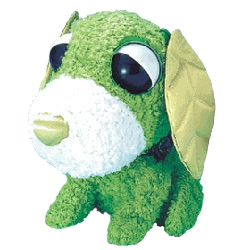 
Note: I'm not sure which paw wakes your tea dog or stops it from being unconscious, but I think it's the right paw.
Because the manual only shows that the toy has a sensor in its right paw, the left paw may not have a sensor in it.