Patata was an unreleased robotic pet from Bandai.

Only a prototype version of the toy that was displayed at the Tokyo Toyfair in 2000 is known to exist.

Patata resembles a rabbit with a long tail and long ears that flap. The toy was in its prototype stage when it was displayed at the toyfair.
According to an article from watch.impress.co.jp, the prototype was made from rough-cut aluminium foil and had a servo for radio control. 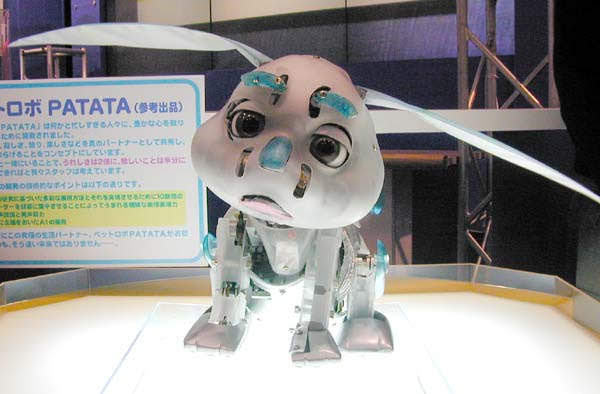 Only one prototype of Patata is known to exist. Patata can flap its ears and tail, blink and move its eyes, raise one of its paws, and move its eyebrows and mouth.
Patata cannot walk, however. Patata is said to use 10 or more servos to change facial expressions when interacting with its owner.
Patata, according to an article from PC Watch, is a further developed version of BN-1. Patata responds to voice commands and is said to learn and grow
through communication with its owner.

Patata at the Tokyo Toyfair

Credit goes to Zorua635 for finding footage of Patata.