T-Dog 2000 is a bootleg Aibo with bump and go action that was sold by a variety of companies. The company that originally created the toy remains unknown.

T-Dog 2000 was only sold in silver at one point. The dog has light-up eyes that flash red while the toy is in action. It wags its tail and moves its legs while
the bump and go wheels beneath move the dog. Companies the toy was sold by include Talentoy (with gray ears), Toho, TOMY, Li Wei, and Valuesafari.com.
The toy takes 3 AA batteries. 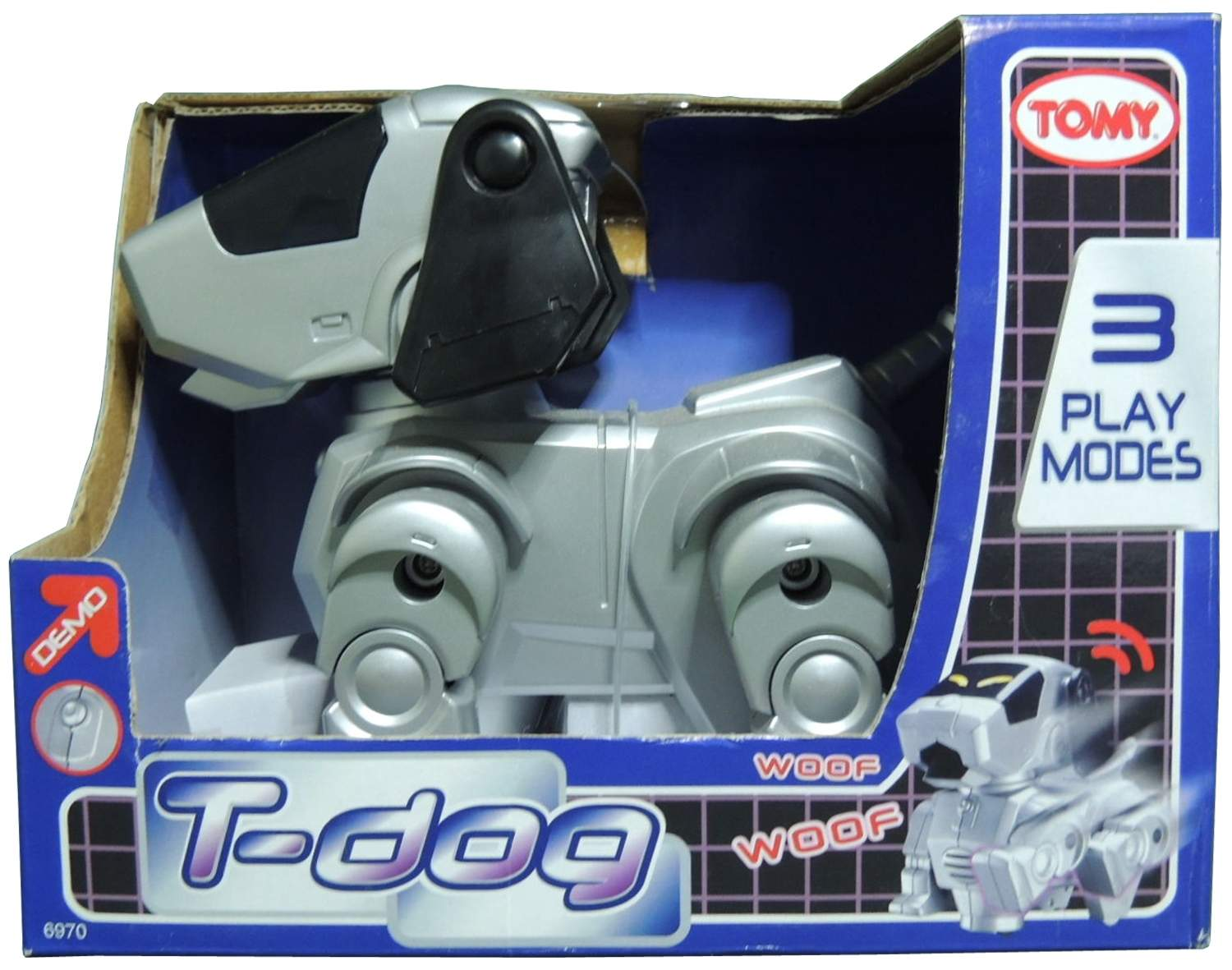 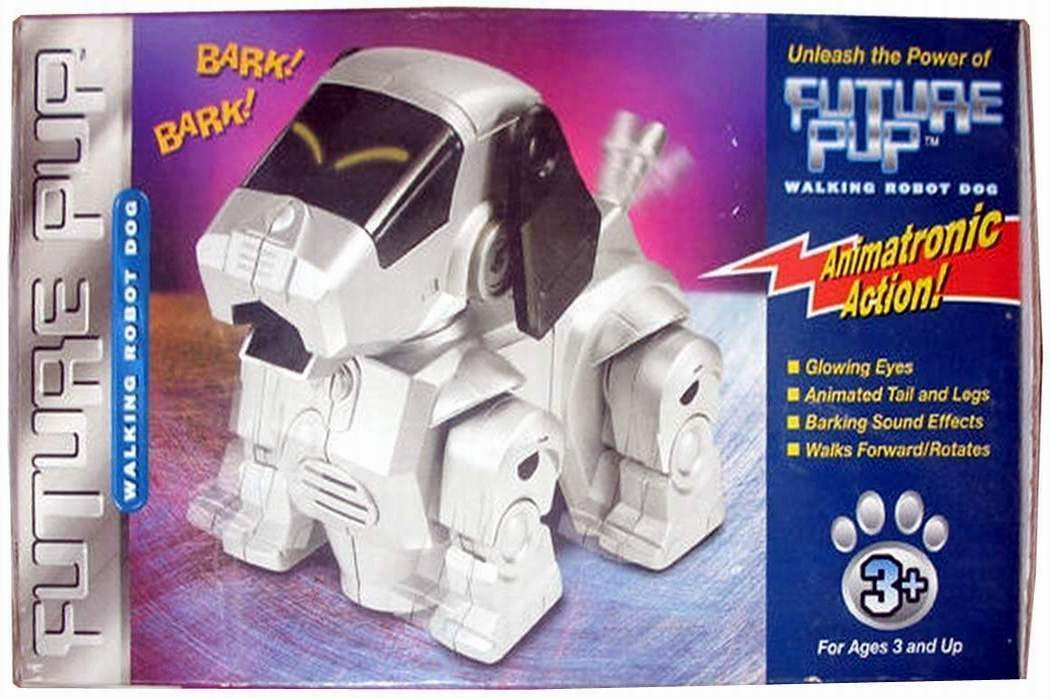 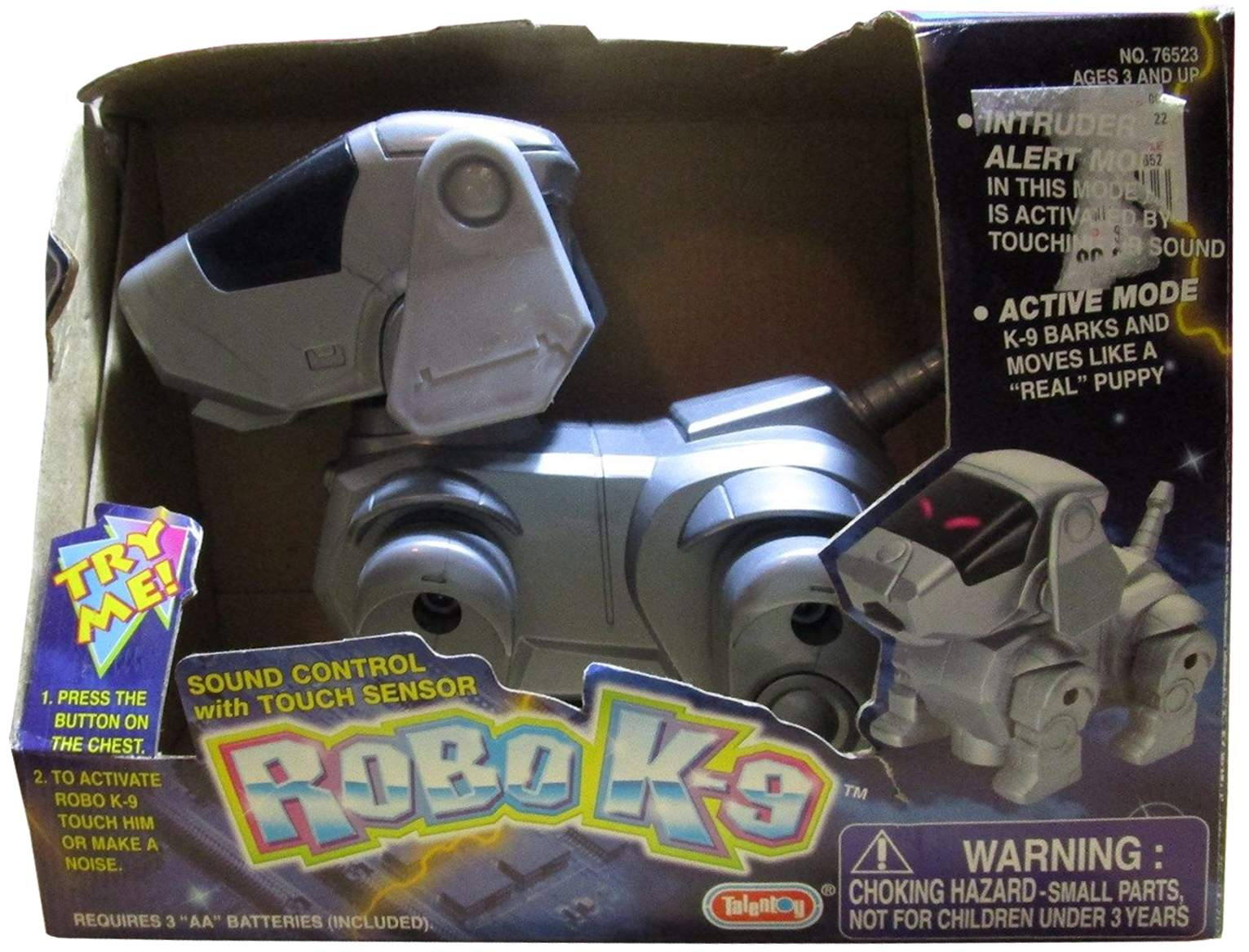 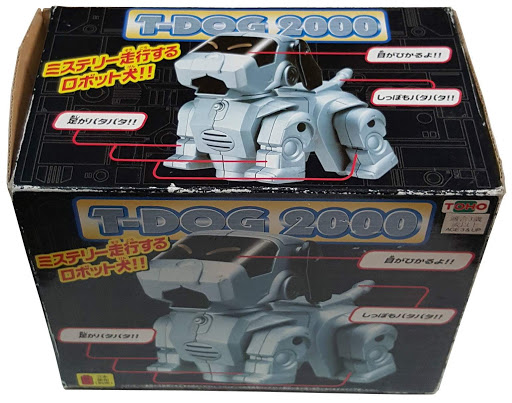 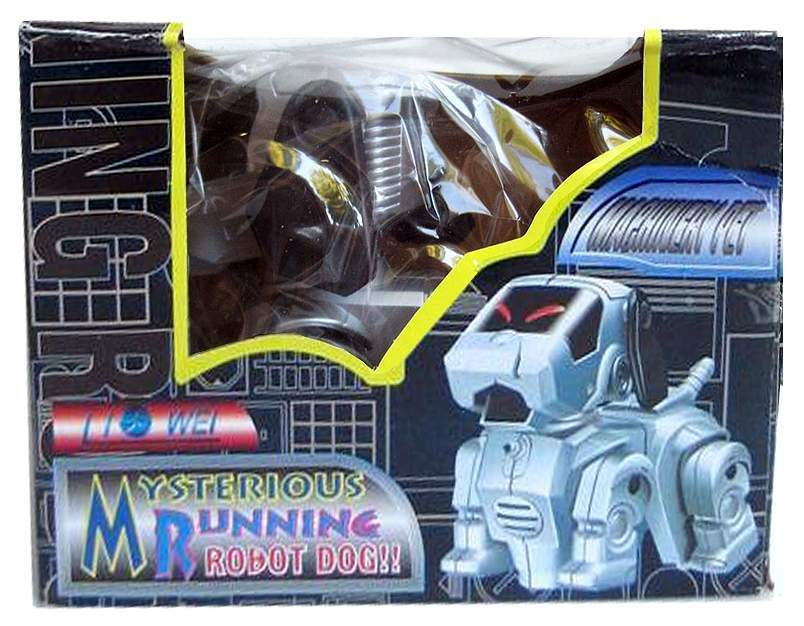 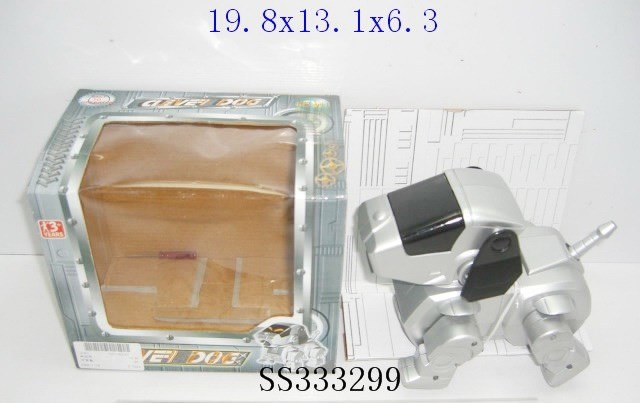 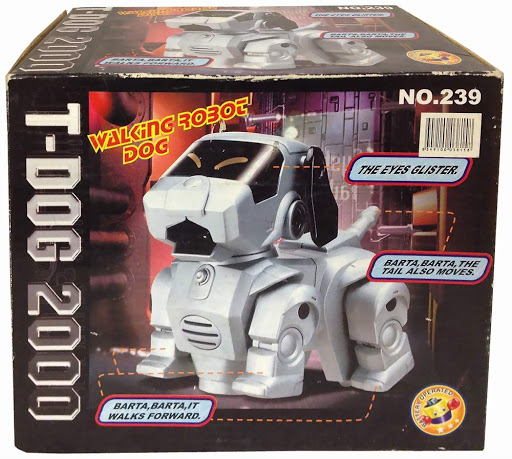 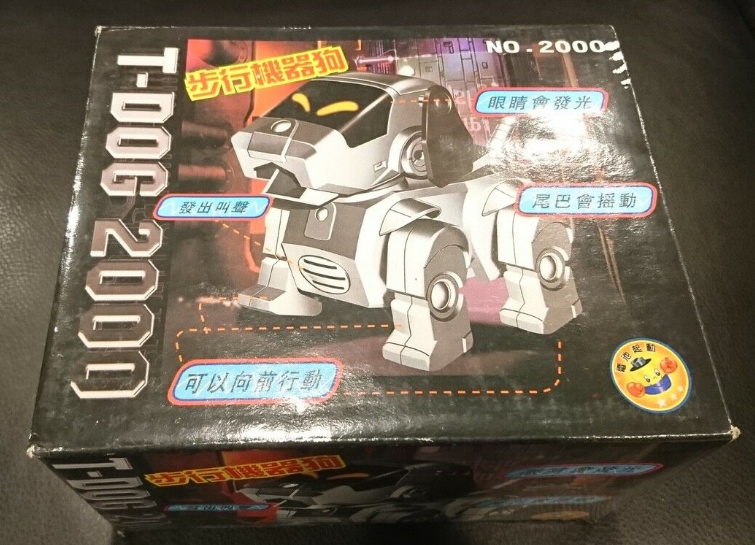 T-Dog 2000 appeared at the Tokyo Toyfair in 2000. Aside from the released version of the toy, two toys that appear to be prototypes of T-Dog were shown.
This included a T-Dog with a silver, metallic appearance and a T-dog with a pink visor, red heart eyes painted on, pink ears and feet, and a red bow with white spots.
Along with the T-Dogs was what appears to be a cat version of T-Dog 2000 that looks different from T-Cat 2000.
Though I cannot confirm it, it's possible the cat variant was a prototype of T-Cat 2000. The cat has a black visor, red whiskers, and a little red nose. The T-Dog with a bow
could possibly be T-Lady which was mentioned in a BBC article. Though the article claims T-Lady was to be released for 1,980 yen like T-Dog, it's unknown if this actually happened. 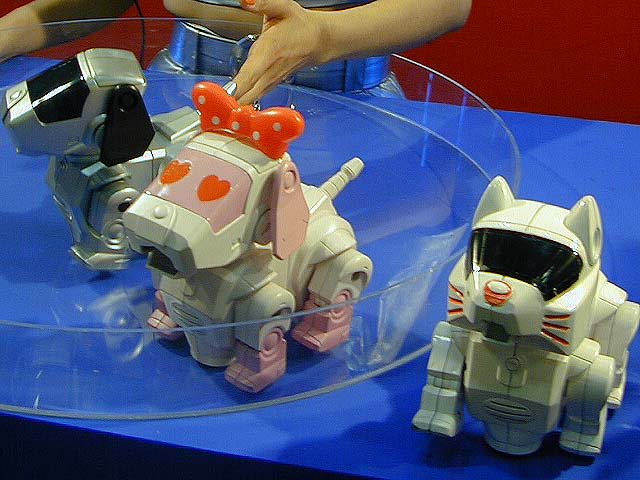 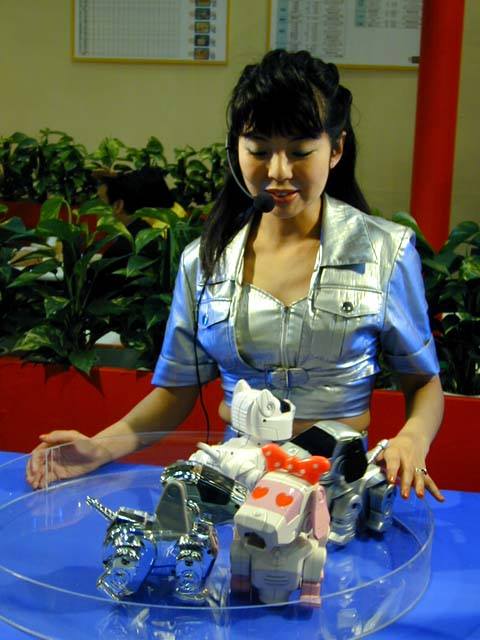 T-Dog was later re-released by Amwell Toys aka Shantou Yingjia Toys in white and blue. The toy this time supposably has
blue light-up eyes with the same design and appearance as its older self.
This version of T-Dog became a part of a series of knockoff toys sold by Amwell, known as the Xin Xin family.
According to the box, the name of the T-Dog is Xin Xin. It's not known for sure if the T-Dog in the stock photo with a white background
actually has a black visor or if the photo was simply edited. 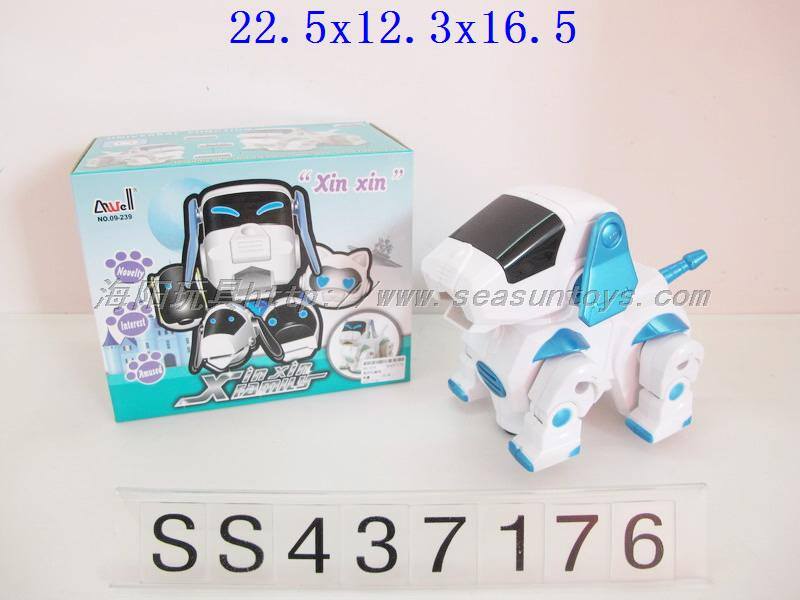 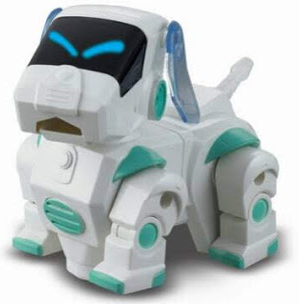 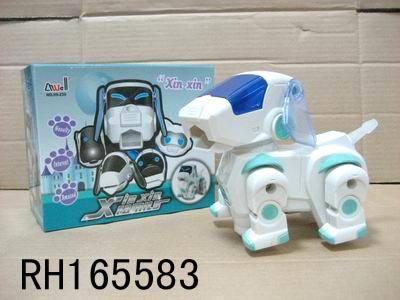 Only three other toys of T-Dog are known to exist, including a wind-up toy and a toy with an air pump attached.
I have only seen the windup toy and airpump toy come in white, no other colors. The one with an airpump is supposed to move, of course.
I found some toy horses that can move using a pump.